Councillor Sir Ray Puddifoot MBE announces his departure as Hillingdon Council Leader and that he will not seek re - election in 2022. 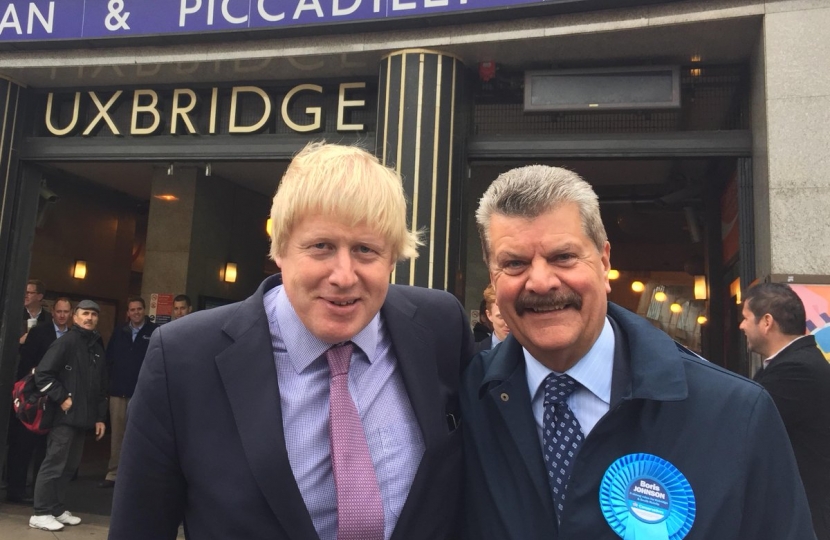 Yesterday Cllr Sir Ray Puddifoot MBE, informed the Ruislip Northwood & Pinner Conservative Association that he would be stepping down as Group Leader and Leader of the Council in early 2021 and would not be seeking re election to the Council in 2022.

It is with profound sadness and regret that we acknowledge this news; however it is tempered with great joy for him that Sir Ray is leaving at a time of his choosing, at the hight of his powers and that he will leave the London Borough of Hillingdon in a fabulous position both financially and in terms of the services provided for Residents across all economic and cultural backgrounds.

On behalf of everyone connected with the Association; Councillors, Officers, activists, members, we would like to sincerely thank and pay tribute to Sir Ray for his 20 years of political and communal civic service to this Borough as a Councillor and Leader of the Conservative Group and Council.  This has been simply an astonishing period of consistent success and triumph achieved by Sir Ray.

Sir Ray is respected across the whole constituency, even in Harrow when we knock on doors we are asked “why can’t we have a council like Hillingdon”.  Sir Ray’s political custodianship of this Borough has been the envy of other Authorities up and down the country and acknowledged as such on many occasions, especially across London.

Thanks to Sir Ray we have a record to be proud of in Hillingdon. Whether it be a decade of frozen council tax, the most green flags for our parks in the country, all front line services enhanced and maintained, the biggest school building programme in London, a record breaking road resurfacing programme or the many millions of pounds put into community group across the borough. His record is second to none.

A mark of his management of the Borough has been the determined and successful way he has gone about the business of making this one of the best, if not the best, run Boroughs in the Country; ensuing that it is financially secure and well set for virtually any contingency or event, from foreign bank collapses to the recent Pandemic.  Sir Ray has ensured that financially and in all other ways this Borough has had the capacity to enjoy good times and withstand not so good times with great success.

Highly respected across the political divides, the envy of other Authorities and recognised by Residents as an extraordinary Leader who puts them first, Sir Ray leaves in order to devote much more time to his family and pursue his interests outside politics.

David Simmonds MP, wishing to be associated with these words of praise and gratitude adds:

“Ray’s outstanding service is recognised by many constituents who praise Hillingdon Council’s dedication to the community, and having served 18 years as his deputy I know he will be a hard act to follow”.

We can not thank Sir Ray enough for the tremendous contribution he has made to the success of Hillingdon; success acknowledged by his recent elevation to a Knighthood bestowed by Her Majesty.

We offer Sir Ray, Lady Lyndsey and all their family the very best of wishes for the future.

Chairman of the RN&P Conservative Association.

For our Campaign Spotlight on the Hartlepool By-Election, meet Jill Mortimer, the Conservative candidate for Member of Parliament in Hartlepool.